43 Million Euro for peace and security in Horn of Africa

IGAD, EU and Austrian Development Agency sign agreement on peace and security in Horn of Africa.

The Intergovernmental Authority on Development (IGAD), the European Union (EU) and the Austrian Development Agency (ADA) signed a EUR 42 million agreement that will go towards IGAD’s peace and security programmes in the Horn of Africa region on March 23rd, 2018.

The agreement is one of many actions being funded by the European Union Emergency Trust Fund for Africa, which was established to promote stability and address the root causes of irregular migration and displaced persons. The agreement also includes financing from the governments of Austria and Sweden.

This action, which covers a four-year period from 2018 to 2022, will help IGAD to improve its conflict early warning systems, become more skilled in mediation, and to counter trans-national security threats. In particular, IGAD and its partner countries in the region will be able to improve the collection and distribution of early warning data, so that governments can take action in time to prevent conflicts.

A new Mediation Support Fund will finance the cost of sending mediation teams into conflicts as they happen, and training in mediation and preventive diplomacy will improve the skills of the mediators. Countries of the region will be able to share their experiences of trans-national security threats, such as violent extremism and terrorism, and work together to find lasting solutions.

During the signing ceremony at the Austrian Embassy Residence in Addis Ababa, IGAD Executive Secretary Amb(Eng.) Mahboub Maalim expressed his appreciation to the European Union and its member countries for their generous support and acknowledged their long-standing partnership with IGAD. He particularly appreciated their sustained financial and political support to peace processes in Somalia and South Sudan.

Ambassador Maalim stated, “The support will be critical in building the capacity of IGAD’s core peace and security programmes in preventive diplomacy, transnational security, counter-terrorism and mediation and enable us to better handle the complex peace and security challenges faced by the region.”

Ambassador Ranieri Sabatucci, the Head of EU Delegation to the AU stated "Nothing of the resources foreseen under this project can have any lasting effect unless they are used to support the political efforts by the leaders of the Region. As much as we would like to see peace spreading in the Horn of Africa, we can't want it more than the people, the institutions and the governments of the region. Our guiding principle is 'African solutions to African problems'. This principle has guided all the EU efforts in the support of peace on the continent".

Mr. Martin Ledolter, Managing Director of the Austrian Development Agency, on his part added: “I am grateful for the trust that IGAD and the EU are putting in the Austrian partnership and expertise. By the end of the program in four years’ time I am confident that IGAD’s and IGAD Member states’ peace and security institutions will be further strengthened in their efforts to protect peoples’ lives and contribute to a secure region.” He underlined the empowerment of women as essential: “I particularly hope that women will be able to take their rightful place at the negotiation tables and gain a much more prominent role in peace processes and conflict prevention.”

Under the European Union Emergency Trust Fund for Stability and addressing roots causes of irregular migration and displaced persons in Africa (EUTF) a EUR 42 million programme co-financed by the Austrian Development Agency (ADA) and the Swedish International Development Agency (SIDA) will be implemented in the upcoming four years with the specific objectives to:

The Austrian Development Agency (ADA) has been delegated by the European Commission to implement this regional programme entitled “IGAD Promoting Peace and Stability in the Horn of Africa Region” (IPPSHAR) together with IGAD Secretariat.

The EU is already active in supporting other IGAD’s programmes, such as peace and national reconciliation in Somalia, and the IGAD led mediation process in South Sudanand the cease-fire monitoring mechanism. 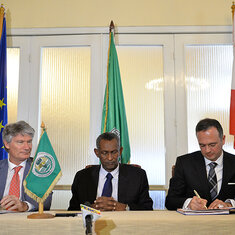 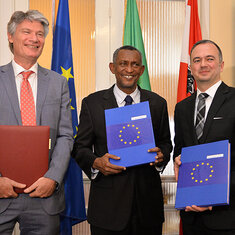 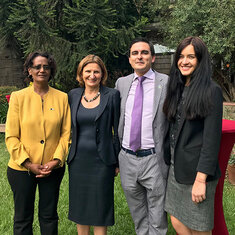