The Women’s Peace & Humanitarian Fund (WPHF) supports women’s civil society organisations (CSOs) that are at the forefront of preventing conflict, responding to crises, and accelerating peace in their communities. In Uganda and across the world, WPHF amplifies the voices of women peace builders and first responders. Austrian Development Cooperation is partnering with WPHF to promote the equal participation of women in peace and security and humanitarian action since 2018.

Today, there are as many refugees as there were during the Second Word War. Countries that were relatively stable over the last few years are falling back into conflicts. If women are actively engaged in peace processes, peace has been proven to last longer. Women also strengthen the economy when they play an active role in the resolution of conflicts. They enhance the impact of humanitarian support and reduce extremism and its spread. Even though the role of women in peace processes is recognised, they receive too little recongnition and financial resources for their work. 20 years after the United Nation Security Council resolution 1325 on women, peace and security, only a fraction of the world’s funding to peace processes and conflict resolution goes to women and women’s organisations.

Stepping up for and as Women
WPHF has been working towards women’s critical role in crisis, conflict and post-conflict regions since 2016. WPHF’s goal is to bring about peaceful and gender-equal societies. To reach this aim, WPHF works with local women’s civil society organisations on the frontlines of the world’s most intractable conflicts. The fund has supported 200 CSOs in 25 countries and has, indirectly and directly, reached 4.8 million people since 2016. Until 2022, Austria is supporting the WPHF globally with more than 6 million euros, of which 2 million are earmarked for Uganda.

Women in peace processes - in Uganda and around the world - are dramatically  underresourced. WPHF funding makes expertise and trainings possible for representatives of partner CSOs and female peace activists. They receive, for example, gender-specific knowledge in mediation. The WPHF, in cooperation with the Spotlight initiative, supports also vicitims of violence during and after crisis, for example young mothers. Nakabugo Jemimah, a mother herself, participated in a program that was the fruit of this cooperation. She is now a key volunteer and shares her knowledge on sexual and reproductive health with other women in her village. “Our mindsets have been changed, we can now see a brighter future and start to rebuild our lives,” Jemimah says on the changes the WPHF made possible.

Uganda’s Crossroads
The east African landlocked country Uganda is at a crossroads. The way forward will decide its sustainable development journey. For a long time, Uganda was the glowing example in development for the World Bank and the International Monetary Fund. This reputation has been damaged: Unsolved past conflicts and human rights violations as well as a legal system full of loopholes, contested elections and border conflicts are putting peace and security to the test.

Since 1992 Uganda is a priority country of Austrian Development Cooperation. Its focus in Uganda lies, in accordance with the national development plan, on the access of the legal system, amongst others. Lasting peace and sustainable development are only possible if women and men, and girls and boys have equal rights. With projects and programmes like WPHF, Austria is supporting this equality. Because the world cannot wait to invest in women on the front lines of crises.­­

About WPHF
The Women’s Peace & Humanitarian Fund (WPHF) is the only global financing mechanism dedicated exclusely to supporting women’s participation in peacebuilding and humanitarian action. WPHF is a flexible and rapid financing tool supporting quality interventions to enhance the capacity of local women to prevent conflict, respond to crises and emergencies, and seize key peacebuilding opportunities. WPHF’s vision is that women equally participate in, contribute to, and benefit from conflict prevention, crisis response, peacebuilding, and recovery. By the end of 2025 WPHF aims to invest in 1,000 women leaders and their civilsociety organizations working to build 1,000 more peaceful and resilient communities. 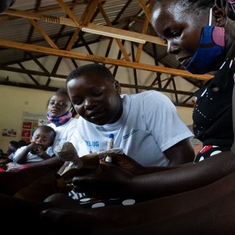