2016 was an election year in Uganda. While many people may know the outcome - incumbent President Museveni claimed victory and has embarked on his fifth term in office - most may not be aware of how women's lives in rural areas were changed in the run-up to this vote. Surprised? The stories of some women in Kapchorwa district are a case in point.

Like most parts of Uganda, Kapchorwa district has had a turbulent electoral history, with deep animosity and fierce competition among candidates. Worst of all, women had no say at all when it came to voting. Mary Cherop from Kapchisome parish sums it up, "Women had no power back then. The power to choose a candidate was with the men. Women's choices didn't matter, they were forced to go with their husbands' decisions or face violence."

All this changed when Kapchorwa Civil Society Alliance (KACSOA), a network of about 83 local non-governmental organisations long active in this area, got involved. Together with local authorities, the media and other stakeholders, KACSOA organised voter sensitisation meetings, radio talk shows, music, dance and drama shows. The goal was to inform citizens about their rights and responsibilities during elections and beyond. The message: Know the issues, know your rights and use them to choose a candidate who will work to improve your life. Most importantly: Women were included in the sensitisation process.

"When KACSOA and our local leaders sensitised us, we were empowered and began voting for candidates of our choice", Mary Cherop narrates, "Most of our men now understand that we have the right to choose leaders. We vote for candidates whom we believe can contribute to development in our area." Francis Chesakit, another woman from the district, also benefited from KASCAO and emphasises, "We know that we have the right to sue those who threaten our peace. We also know that if our leaders don't deliver, we can vote them out of office. This is because we consistently monitor them."

KACSOA was able to reach about 100.000 people, a significant contribution to promote positive change. The network has received funding support from the "Democratic Governance Facility - DGF", a programme set up by seven countries including Austria and the EU in 2011 to foster good governance, the rule of law and democracy in Uganda. More than 80 partner organisations in Uganda participate in the DGF and have reached millions of citizens with various interventions so far. DGF and its partner KASCAO made sure to include women in the voter sensitisation process and in doing so got one step closer to building a democratic, peaceful and equal society. 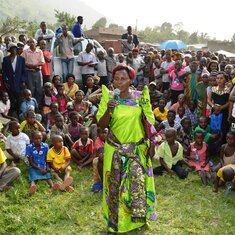