Drinking tap water was something rather unusual in the Moldovan city Cantemir until recently, a functioning sewage system even more so. Thanks to the European Union and Austria, the city is on a good track.

Until ten years ago, residents of Cantemir only had access to tap water for two to three hours per day. Today, they have fresh water whenever they open the faucet. The EU and Austria made it possible.

The next step is to make sewage disposal more efficient. 3.500 people will be connected to the new, 18 km long piping network until 2021.

In addition to the treatment plant, water tariffs for the local waterworks will be reviewed. Employees will be trained in maintenance and operation of the plant to ensure the long-term security of water supply and sewage disposal.

"Finally, a dream comes true: Cantemir gets a sewage treatment plant and a sewage system. I’d like to thank the European Union and Austria. They have been reliable partners for ten years. Together, we’ve already successfully realized several projects", says Roman Ciubaciuc, the mayor of Cantemir. 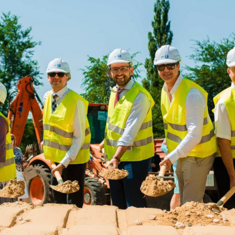