We have signed a Grant Agreement to support the peace process in Sofala, Mozambique, through the DELPAZ project. The agreement with the Provincial Executive Council of Sofala Province (CEPS) worth 4.7 million euros runs until the end of 2024.

Mozambique has lived through turbulent years of military tensions as well as destruction through natural disasters, like cyclone Idai in 2019. With the DELPAZ Sofala project (Local Development for the Consolidation of Peace in Mozambique), we are supporting investments in infrastructure, public services, agriculture development and entrepreneurship to consolidate peace in Central Mozambique. The project is part of the EU’s DELPAZ Programme, which covers a total of three provinces in the East African country. With the Grant Agreement signed, our work is now officially under way.

During the signing ceremony, the Governor of Sofala, Lourenço Bulha, expressed his appreciation for the European Union’s and the Austrian Government’s continuous support to the population in Sofala. Bulha outlined the goals in the early phase of the programme for the districts of Machanga, Chibabava, Gorongosa, Maringue, Chemba and Cheringoma. ”During the first year, CEPS will implement quick actions such as the distribution of agriculture inputs, construction of greenhouses, small irrigation systems, livestock dip-tanks and solar water supply systems as well as education on better sanitation and nutrition practices. CEPS will also facilitate community dialogues at district level in order to identify and finance investments that can help communities to be more resilient to climate change and foster the economic inclusion of women and the most vulnerable.”

Hubert Neuwirth, head of our local office in Maputo, added: “I am grateful for the trust that CEPS and the EU are putting in our partnership and expertise. I am confident that the programme activities will have contributed to better livelihoods, enhanced food security and peace and security in the communities by the end of the programme in December 2024.” He underlined the empowerment of women as essential. “The programme will have a special focus on women, so that they are not only beneficiaries, but have a more prominent role in district planning and decision-making processes.”

DELPAZ Sofala is a sub-programme of the 25-million-euro DELPAZ Programme financed by the European Union, which aims to promote local economic development in conflict-affected areas in the provinces of Manica, Tete and Sofala. Isabel Faria de Almeida, represented the EU as Head of Cooperation of the Delegation of the European Union in Mozambique. “The EU and its Member States are highly committed to supporting the peace process, notably through the support of the Disarmament, Demobilization and Reintegration (DDR) of former combatants. The progress made with the DDR brings hope, but the process of reintegration and reconciliation is just starting. With the DELPAZ Programme, the EU reinforces its engagement with the peace process, aiming to promote a more equitable development of the host communities, and relaunching their local economies in order to provide opportunities and jobs for all, so that there is no return to violence.”

DELPAZ is part of the European Union’s comprehensive 60-million-euro support to consolidate the peace process in Mozambique, which includes support to the DDR process, reconciliation, support to the local economic development of host communities, and decentralisation. 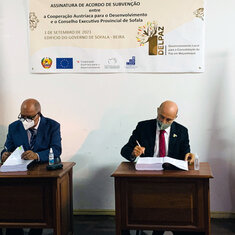