How land deals are threatening livelihoods in Africa

Agricultural land is a valuable asset in Africa – for the local population as well as for global investors. We are advocating land and water rights for the local African population and support the Institute for Poverty Land and Agrarian Studies in securing the livelihoods of small farmers.

Africa’s fertile land has been in the centre of global land investments. 42 per cent of all globally concluded transactions concern ten million hectares of agricultural land on the African continent, making Africa the most sought-after region for land investments in the global south, according to data from the Land Matrix. The investments were mostly for food and agro-fuels. However, investors are also (usually unknowingly) acquiring another vital resource for locals: water.

From 2016 to 2019, the Institute for Poverty Land and Agrarian Studies (PLAAS) conducted a study on agricultural investments in Africa and their consequences for the local population. We are funding the project „Land and Water Rights in Southern Africa: Entrenching Global and Regional Policy” with 650,000 euros. In the long-term, the project is supposed to secure the rights of 181 million small landowners to their lands.

The study was conducted in nine districts across seven provinces in Mozambique, South Africa and Zambia. The results show: local farmers were often dispossessed involuntarily. In 90 per cent of all cases, small farmers were insufficiently compensated or not compensated at all. In total, around 160,000 hectares of agricultural land were lost, buyers often failed to deliver on their promise to create jobs.

With their land, many people lose the foundation for their own existence at the same time. Without land and water sources, the local population becomes vulnerable to food and income insecurity. Women are especially affected.

To protect the affected rural population, PLAAS is fighting for new regulations. They are raising awareness in communities about existing directives on land use rights, including the guidelines of the Food and Agriculture Organization (FAO) of the United Nations. Enforcing these (usually) voluntary guidelines remains an issue in Southern Africa, however.

The institute is actively seeking a dialogue with civil society organisations and local land and water resource owners in Mozambique, South Africa and Zambia to help them articulate policy demands. PLAAS is engaging with decision-makers such as the ministries of agriculture in the three countries, also becoming part of the advisory body to the Land Policy Initiative at the African Union (AU).

The project has already achieved first successes. In Zambia, for example, the Free Prior Informed Consent (FPIC) principle has been enshrined in the country’s 2019 Draft Land Policy. The principle protects indigenous people’s right to self-determination and allows them to “give or withhold consent to a project that may affect them or their territories”.

With our financial support, PLAAS will continue to secure land and water rights for vulnerable communities in the coming years. 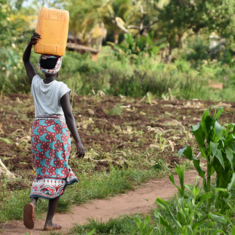