The Future of Kosovo Lies in Its Schools

EU and ADA strengthen modern vocational training and close the gaps between the national education system and labour-market demands.

In Kosovo, thousands of people are entering the job market, around 60 percent of young people aged 15 to 24 years don’t have a job. The European Union (EU) and the Austrian Development Agency (ADA) strengthen modern vocational training and close the gaps between the national education system and the requirements of the economy – for more employment and less poverty in the country.

There is no sustainable development without education: The calculation seems simple and yet difficult. In Kosovo, one of the poorest countries in Europe, more and more young people fail to find a reasonably paid job despite having a university degree. The youngest nation in Europe is struggling with outdated curricula and training standards that do not meet the needs of the labour market. An initiative by the European Union and Austria is gradually changing that. ADA, the operational unit of Austrian Development Cooperation, has been implementing the joint project totalling 8 million euros for the EU since 2015.

The project, running until 2022, will align curricula of universities and vocational training centres in Kosovo with the specific requirements of businesses. The initiative also aims to converge qualification criteria to European standards. The Austrian Development Agency works directly with the ministries for education and work, public universities, vocational training centres and the national agency for qualifications and employment. Austria contributes 1.4 million euros.

People – the most valuable resource

"A state's most valuable resource is its people. We are committed to high-quality education for everyone. This is the only way we can achieve better living conditions worldwide. In Kosovo, half of the population is under 30 years old, so there is enormous potential. The future of Kosovo clearly lies in its schools. With this project, we want to make some progress at institutional level. We are very pleased that the EU is relying on our expertise", said Martin Ledolter, Managing Director of ADA.

Kosovo: Education is the future

Education is a human right and at the core of our personal and social development. This is also laid down in Goal 4 of the 17 Sustainable Development Goals (SDGs). Well-trained people have better chances of finding a job and meet the demand for skilled personnel. In addition to developing and ensuring quality in education, Austrian Development Cooperation is committed to enabling equal access to vocational and higher education. In 2018, it invested 18.5 million euros in educational projects.

Kosovo has been a priority country of Austrian Development Cooperation since 1999. In economic terms, the country is developing with relatively stable and strong growth rates. However, there is great poverty and high unemployment. The average income amounts to about 450 euros per month. According to the World Bank, around 18 percent of the population currently live on less than 2 US dollars a day. Austria has been supporting its partner country in developing a modern education sector for 20 years now. 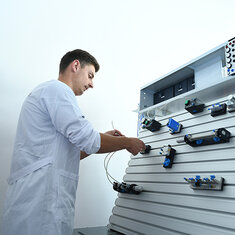