Toilets Can Save Lives

World Toilet Day: More than half of the world population lives without toilet.

673 million people still practise open defecation. 432,000 people die of the consequences each year. Every year on World Toilet Day, the international community puts the global sanitary crisis on the agenda. Austrian Development Cooperation is fighting for the human right to sanitation.

Contaminated ecosystems, deadly diarrheal diseases, missed schooling and nationwide epidemics: That is the bitter reality for people without access to safe sanitation. 4.2 billion people around the globe don’t have a choice but to share their toilets with multiple households or even relieve themselves outdoors. Women are often afraid to be attacked or raped when they do so at night. Crisis regions are especially affected. Austrian Development Cooperation is standing up for refugees and host communities in Uganda and Lebanon.

Every year on November 19, the United Nations' World Toilet Day brings attention to the lack of safe sanitation. An issue which is still considered to be taboo in many parts of the world. The fight for better living conditions is not only about food security and quality education, but also about safe sanitation. And it is high time: 2 billion people are forced to drink water contaminated with fecal bacteria. 3 billion people don’t have the opportunity to wash their hands after relieving themselves. The shocking results are preventable, and often fatal diseases. According to the World Health Organization (WHO), 432,000 people die from diarrheal diseases caused by unsafe water and poor hygiene every year.

“These degrading conditions must come to an end. Toilets can literally save lives, and this is what we are advocating for. We need to end the stigmatization of the issue, no one should be left behind. Safe sanitation is a human right, not a luxury good”, says Martin Ledolter, managing director of the Austrian Development Agency (ADA), in an effort to emphasize the importance of Sustainable Development Goal 6 (SDG 6). The agency of Austrian Development Cooperation has made 10.3 million euros available for this endeavor in 2019.

Aid for refugees and host communities in uganda and lebanon

The money is used for new latrine blocks, a waste incineration plant and hygiene training in the Imvepi refugee camp in Uganda. In recent years, Uganda has taken in more than a million refugees from war-torn South Sudan and other countries in the region. Now they live in large-scale settlements with poor sanitation, if there is any at all. One of these camps is Imvepi, home to more than 100,000 people. The Austrian Red Cross is working to improve sanitary conditions for around 12,500 of them.

The money also reaches refugees in Baalbek, a district 80 kilometers northeast of Beirut, Lebanon. Fled from Syria, they now live in tent camps on private land, owned by Lebanese people that struggle with safe sanitation themselves. Here, the Red Cross is focusing on securing water supply and improving sanitary facilities in schools and health centers. Private households will be equipped with water tanks and new latrines. 4,900 will benefit from the project. Austrian Development Cooperation is supporting them with half a million euros in financial aid. 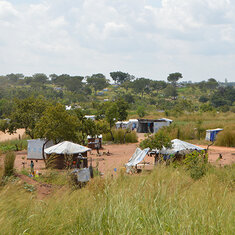 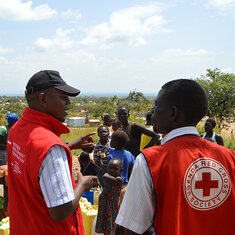 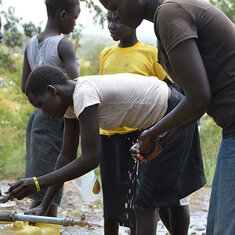