Federal Minister for Europe, Integration and Foreign Affairs, Sebastian Kurz, opened the closing conference of an EU project support the reform process in Albania and implemented by the Austrian Development Agency (ADA).

The Project Preparation Facility (PPF) was introduced by the European Commission for candidate countries on the way to EU membership and offers fast and flexible support to the adoption of the EU acquis (the accumulated legislation, legal acts, and court decisions which constitute the body of EU law) and for the preparation of projects funded under the Instrument for Pre-accession Assistance (IPA). The overall objective of this project is to improve the planning, programming and implementation of IPA and to support mechanisms for an integrated EU accession process in Albania.

On 11 February, the Federal Minister for Europe, Integration and Foreign Affairs, Sebastian Kurz, opened the closing conference of the Project Preparation Facility emphasizing that Austria was assigned a central role in driving the reform Agenda Albania's forth. More to the point, the Albanian Government should act in concert in order to implement the reform in a coordinated manner safeguarding EU-budget support and to be on track for EU accession.

In Albania, Austria supports in particular the staff of the Ministry of European Integration and other line ministries in the planning, programming and implementation of public administration reform projects (public finance management, employability and skills, water and sanitation, infrastructure).

The Minister for European Integration, Klajda Gjosha said that the reforms provided Albanians with better opportunities and allowed for the development of standards equal to the standards, which EU citizens enjoyed. The most tangible impacts derived from infrastructure projects, because those projects had a real and immediate effect in improving the lives of people affected by the implementation of the projects.

In implementing the project, ADA has organized 40 workshops and trained about 2.200 civil servants. 300 project and program documents have been checked and prepared, 3 sector pograms elaborated and 2 high-level conferences organized. The Ministry of European Integration established a task force of 15 trainers. The quality of IPA project proposals has improved by 70 percent and the delay in submission of projects has reduced by 80 percent. In return, this increased the chances for EU-funding.

The establishment of the Integrated Policy Management Group (IPMG) in four pilot sectors: integrated water managemen, competitiveness and innovation, employment, skills and social policy and public administration reform is an important milestone of the project. This mechanism aims at the development, implementation and monitoring of sector reforms in Albania, through the drafting of national sector programs and the establishment of a single project pipeline for strategic investments, in line with government priorities, the National Strategy for Development and Integration

The Ambassador of the EU to Albania, Romana Vlahutin said that the project also helped to create high-level management structures to guide sector reforms in Albania in line with the national development strategy, the accession process, and the country's international obligations.

The project makes an important contribution to the public administration reform and the restructuring of the Ministry of European Integration. 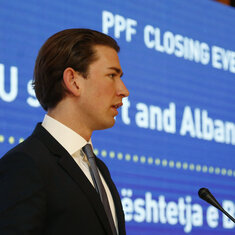