Floating in the air instead of being stuck in traffic

In Bolivia, the largest urban cable car network in the world is helping to ease traffic congestion. The technology for this came from Austria.

Today, Sabina Pacozillo needs 20 minutes to get to work; it used to take her two hours. “I don’t have to worry about traffic problems anymore,” she says. “I simply take a cable car.” Sabina lives in Bolivia’s El Alto, the twin city of La Paz. The poor, often indigenous, people live up in El Alto and the more prosperous down below in the valley, where most of the jobs are.

Speeding through the air

In the past, people like Sabina used to have to struggle for hours through heavy traffic. Not anymore: Today, they glide on the cableway to work, comfortably and quickly. Over 350,000 people a day use Mi Teleférico, the world’s largest urban cable car network, spanning a ropeway of over 30 km. It was built in fewer than seven years and now comprises ten lines and 26 stations. Mi Teleférico was developed and built by the Austrian company, Doppelmayr Seilbahnen Gmbh. “As we can see from Bolivia, there is a lot of potential in this means of transport, especially for urban centres,” says Managing Director Thomas Pichler.

Already familiar and popular in skiing and leisure areas, cableways have also proven their worth in towns: They can be implemented quickly, are reliable, make almost no noise, emit no exhaust fumes and ease road congestion. Their robust technology has been tried and tested. This is why a growing number of towns have taken up cableways as a means of transport in recent years besides La Paz - Mexico City and London, for example.

Another advantage of cableways is their integrational effect. They can be assimilated smoothly into existing means of transport and are attractive for people from all sections of the population. A ticket costs the equivalent of 40 cents in La Paz, for instance, where the cableway connects high and low – spatially and socially.

“15 to 20 per cent of all passengers now opt for the cableway,” says César Dockweiler, head of Mi Teleférico, making it the most popular means of public transport after just a few years. It is a tourist attraction as well. Archaeological relics found during construction are now on exhibit at the stations. This museum tour has been funded by Austrian Development Cooperation. And another thing: You get the most beautiful view of La Paz from the gondolas. 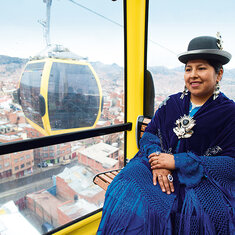